District Heating Network optimization for the City of Blois 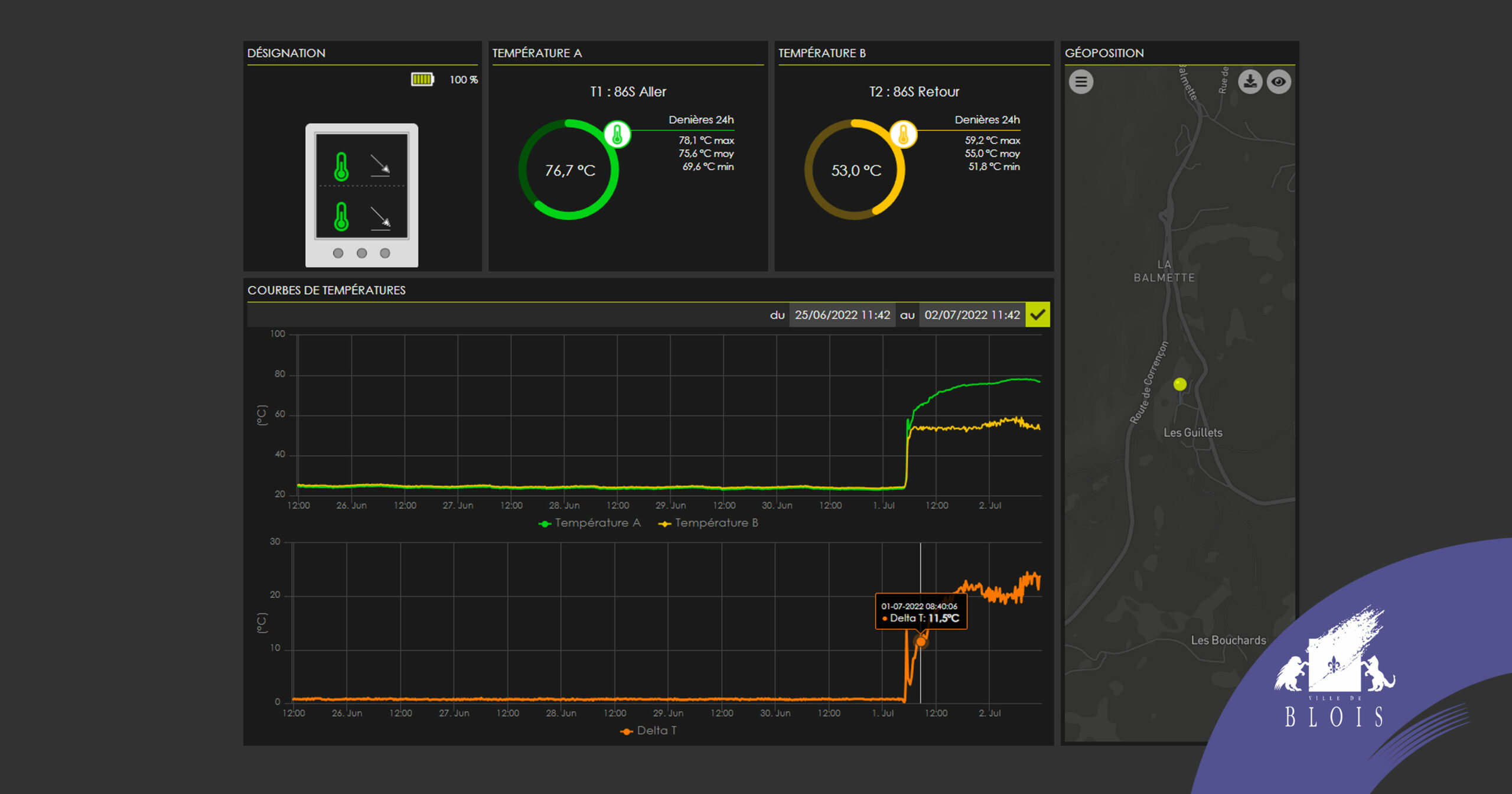 The IoThink Solutions team got contacted by the urban heating department of the City of Blois in France to optimize the district heating network of the whole town and reduce heat loss.

Here the users were mainly tenants of housing but also tenants of city buildings, schools and sports halls. The network is composed of more than 90% renewable energy and is supplied by a 14km network.

In the near future, the gains of this downgrade will be mainly to get less expensive equipment, reduce heat loss and maintenance, with the objective of keeping the heat cost under control.

Originally, a technician would go onsite only once a month to perform temperature readings.
Now, the urban heating service can monitor remotely the temperatures of the city heating system by receiving data automatically every 10 minutes !

For this project, Enless Wireless temperature sensors (dual probes) have been connected to the heat circuit of the sub-stations of Blois.
The technology selected here was the LoRa public network operated by Orange Live Objects.

If a threshold is exceeded (high or low threshold), corrective action is taken by the operator who manages the heat delivery through the public service delegation contract after consultation with the City Council.

Benefits of this IoT solution:

– Simplicity of the implementation

– No need for on-site data collection

– Increase in data frequency and accuracy

First feedbacks on the solution implemented

“The use of connected probes has allowed us to quickly set up a temperature measurement and monitoring campaign. Initially, this had a significant impact on the human resources mobilized. We would not have been able to carry out this operation with traditional probes whose installation and follow-up would have been very time-consuming (agent time which we did not have). Thus, the cost of the equipments deployed was amortized through the agent time saved over the campaign period.

The connected probes allowed us to get feedback from the beginning of the data transmission, which would have required a much longer time with probes equipped with recorders. The main goal of this operation was not to save energy but to optimize the management of the network and thus to free up heat in order to consider other connections without increasing the power or lowering the temperatures. These measures will subsequently result in potential savings.”

IoT Solutions for
your use cases

You can find out more about which cookies we are using or switch them off in settings.

This website uses cookies so that we can provide you with the best user experience possible. Cookie information is stored in your browser and performs functions such as recognising you when you return to our website and helping our team to understand which sections of the website you find most interesting and useful.

Strictly Necessary Cookie should be enabled at all times so that we can save your preferences for cookie settings.

If you disable this cookie, we will not be able to save your preferences. This means that every time you visit this website you will need to enable or disable cookies again.